Naqqali is an Iranian art of narration that has long been associated with the history of Iranian society. Although the art of naqqali has been inscribed on the intangible UNESCO World Heritage List, from the epic narrations of Shahnameh to the stories of Abu Muslim and Samak-e Ayar, today this art has been marginalized and ignored.

Naqqali is a cultural gesture that has been prevalent in Iranian society since ancient times. Narrators or Naqqalan narrate stories of ethnic, national, religious, and historical events, quasi-historical and religious events. They speak in a measured and melodic way, and a warm and expressive expression in public or in private gatherings or private circles. Narrators had a great deal of talent and art in story-telling and representing events and inducing exciting events, and they had a taste for art in expressing the way events were portrayed and imitating movements and behavior.

They knew how to speak and imitate in each assembly according to the cultural consciousness. They improvised and expressed language, mixing the themes of the story with advice, parables, jokes, playing, and imitating the characters in the story. In this article, we will get acquainted with this Iranian art registered in the UNESCO World Heritage List.

History of naqqali in Iran

The art of storytelling, has long been popular among Iranians. With the arrival of Aryan tribes, based on their beliefs and myths, this art became more and more prominent among them, and was manifested in all aspects of their lives. Ancient stories such as the anecdotes about Mitra, Anahita, the story of Siavash, and the story of the Rostam family, all show the antiquity of this phenomenon in the ancient Aryan land. Naqqali or the art of storytelling provides good nutrition such as ancient myths and legends. It is the most ancient art of taught and imagination that is left from ancient people.

With the arrival of Islam in Iran, the art of storytelling or naqqali flourished, and this popular tradition continued to grow. Storytellers or naqqalan narrated the epic and heroic stories of Rostam and his descendants in public gatherings. The influence of this kind of naqqali had reached the point where some Arabs narrated the stories of Rostam and Esfandiar in their public in order to fight the Prophet of Islam and the Holly Quran.

The effect of naqqali in Iranian culture

Naqqalan or narrators had no purpose other than attracting the audience by narrating historical and mythical stories along with dramatic movements and situations associated with the events of the story. In most cases the audience were so influenced by their narration and show that the disciple and mentor tradition was manifested.

Mohammad Taghi Bahar, quoting Ibn Qutaybah, a scholar of the third century AH and the author of the book Ayoun al-Akhbar, writes in this regard:

In Merv, we came across a storyteller who told stories and impressed us. Then he pulled his tambourine out of his arms and began to play, saying, “Apa, with all this misery, we need a little laughter.”

Many experts of Iranian plays believe that in order to explore the antiquity of pre-Islamic plays in Iran, it is important to pay attention to ritual plays, marionette, and especially “naqqali.”

As mentioned earlier, naqqali is one of the most common forms of drama or the art of dramatic story-telling that an actor usually had, and naqqal was considered the most brilliant narrator in the history of Iranian drama.
Bahram Beizai writes in the definition of naqqali:

“Narration is the transmission of an event or story to poetry or prose with appropriate gestures and expressions in front of the audience.”

The important point here is that a naqqal must have certain conditions and characteristics. Because their work was very sensitive and difficult. “without using any tools, and only with the power of expression and harmonization of movements, faces and hands with words, the events of the story should be imagined in such a way that the emotions are aroused.”

That’s why a naqqal has to own a good voice and be completely familiar with musical instruments. What’s more, the intermediate and face-to-face communication with people, and correction of some mistakes had a tremendous effect on the subsequent performances. So a naqqal increased the impact of his work by eliminating the shortcomings. Because “the distribution of pauses and delays between the word chain, the method of increasing and decreasing the fundamental sound frequencies, performance of melodic patterns of the melody along with the appropriate movements of head, hands, face, clapping hands, hitting the ground in naqqal influenced on listeners and the audience. They have learned from experience where it is exciting for people to speak, and what speech context to choose to increase the excitement … It kept the audience entertained.

Naqqali and other performing arts

The way the play was performed by naqal was very different from other people who were individually engaged in magic and witchcraft. In other words, their speech and gesture was not persistent. By spreading the play in different neighborhoods and places, they would form a gathering, and everyone who came from anywhere in the play or the battle, would enjoy their words and movements at the same time and minute. On the other hand, what a naqqal says is persistant, and his story needs to be followed. Listeners had to attend his storytelling days to take advantage of his stories.

In another part of his article, Dr. Sasan Spanta, while emphasizing that the poems of Ferdowsi’s Shahnameh were accepted among the people due to the efforts of the naqqals.
The following feature are some of the keys to success:

What Beizai, Spanta, and other researchers in the field of Iranian drama say about naqqali is one of the things that can still be used today as a benchmark for measuring naqqali. Therefore, the most important narrative features are:

4- Ability to use tools and equipment such as sticks, stools and spears

5- Preserving and knowing the story and information so that they can fit in any gathering.

At a time when naqqali was very popular, naqqalan who narrated the stories of Abu Muslim, Darabnameh, and Samak-e Ayar, along with poetry and song, gradually turned to other sources, and in the meantime, Ferdowsi’s Shahnameh received the most attention. The story of Shahnameh is related to the history of coffee house, and the story of Rostam and Sohrab has the most important position in this regard, so that today naqqali in the coffee house is synonymous with “Sohrab Koshi“!

But reading Shahnameh was not easy, and Shahnameh readers were usually poets or writers themselves. The popularity of reading Shahnameh also had a social reason, because in Safavid society, there was a special military group called “Ghezelbash” whose main task was to participate in wars and maintain the fighting spirit. The Ghezelbash were among the regular customers of coffee shop, and the narrators’ heroic quotations from Shahnameh could naturally have had a profound effect on their fighting spirit.

Today, in smaller towns and villages, people are not yet unfamiliar with the art of storytelling, and in rituals and ceremonies, naqqalan perform their art, but in large cities, the performance of veteran narrators is limited to special ceremonies and some cafes and cafeterias. Tradition is limited, and few theaters and workshops are dedicated to promoting and performing it.

Organic Persian tea and key points in buying it: Persian tea is known as organic tea in the world because due to the suitable climate

Kish island Iran Maybe you did not know that Kish Island is the oldest island in the Persian Gulf, this island is one of the 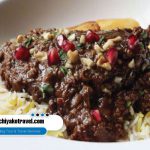