Golestan Palace located in Tehran, Iran. You can see the glories, excesses and masterpiece of Qajar rulers especially Nasser Al-Din Shah Qajar with the embodiment of successful Iranian design and architecture with western influences across this complex. The complex was imitated from European palaces. It is set in an elegant garden and decorated with beautifully painted and colorful tiles that covered the walls and floors in an artistic way. Tiles of the main hall is very unique and eye-catching. It is a good sample of Iranian art in field of interior design. In this article of Chiyakotravel, we are going to take a look at Golestan palace together.

The palace complex originally built during the reign of Tahmasp I, of the Safavid dynasty and later renovated by Karim Khan of the Zand dynasty. Then Agha Mohammad Khan of the Qajar dynasty chose Tehran as his capital. The Palace complex (The court and palace of Golestan) became official residence and the seat of the Qajar dynasty. It was also, where the Pahlavi’s were crowned. It is better to say that it was a marble throne for Reza Shah and the museum hall for Mohammed Reza.

The complex of Golestan Palace consists of different structures, including palaces, museums, and halls. It also consists of three main archives, including the photographic archive, the library of manuscripts, and the archive of documents.

Ask any person the address of Tehran’s heart, they show you the road through the market and June 15th street. Many people believe that real Tehran is this area, a place where you can take a pleasing tour and see many attractions.

Golestan Palace is a name that shines among Tehran’s attractions and is also on the UNESCO Cultural Heritage List. Most people consider the collection as a heritage from Qajar era, but its history goes back many years ago. Golestan Palace is one of the most unique historical collections of Iran for more than 440 years, and attracts every viewer with its beauty. Nasser Najmi wrote in his book “Tehran in the Nasserian Age” that because of its location in the garden or in the flower garden, and the existence of gardens and long streets with sycamore trees and flowers this garden called Golestan.

Golestan complex has been host of kings for many years and has been inhabited by Aqa Muhammad Khan Qajar, Fath Ali Shah, Mohammad Shah Qajar, Nasser al-Din Shah Qajar, Mozaffar al-Din Qajar, Mohammad Ali Shah Qajar and Ahmad Shah Qajar. Today, Golestan Palace, with a width of 5.4 hectares, which is only a tenth of its original extent, is being forgotten in one corner of Tehran. From all the glory, there are only a few buildings left that are lost in contemporary constructions.

Golestan Palace complex may carry the title of a monument, and has a lot to say about history of the land, but not all of its attractions end there:

A quiet spot away from tensions

Imagine the hustle and bustle of June 15th street, the peddler market is hot and shopping cars are heading around. The carriages move people and the sound of their movement on the cobblestones is constantly heard. Walk a short distance from this street to the Golestan Collection; no more sound. Now everything is the sound of a waterfall and the cool breeze and the sound of birds. As if time comes back and the inhabitants of this palace are still alive, life still flows and Qajars are on their way. You can choose a cozy corner, close your eyes and go to another world with ear catching sounds.

The world of colorful tiles

If you just know a little bit about colors and patterns, you will be took near the walls. There is a world of motifs and images ahead of you, and you can see the most spectacular Iranian tiling in near distance. They are so delicate that you think they will break easily. Now imagine many years ago with the equipment of that time and creating these patterns that how amazing they are.

To have a cup of tea

There is also a small café in the complex, where you can enjoy sweet and pleasant moments. Sit on a chair and dine in a Qajar mansion with European-Iranian architecture for a drink or a delicious Iranian snack.

Although the size of Golestan complex has been reduced today due to urban constructions and the demolition of various buildings, you can still see numerous buildings that are interesting museums:

In Golestan, buildings aren’t the only attractions for spectators; the space presents trees and pools and fountains offering a different setting. Where photography subjects are abundant for art lovers. From colorful tiles to dance of water in the pool and each of the passageways, everything can draw your attention. It is better not to go straight to the buildings and spin a garland in the yard. You will not lose sight of the buildings and still have fun. There is also a small market near the entrance that will take you into the colorful world of crafts and make good memorabilia from there.

Visits: 4000 Tomans for Iranian nationals and 30,000 Tomans for foreign nationals.
* This fee includes entrance to the Golestan Collection area and you must obtain a separate ticket to enter each building.

It’s up to you what building to see first and which buildings to turn next. There is no pre-arranged sightseeing in Golestan Palace grounds, but we invite you first to see the flagship of the complex. A building that used to be the capital’s symbol before the National Garden was built. It is also known as one of the symbols of ancient Tehran.

It is a tall and interesting building, one of the most prominent buildings of Golestan Palace, and the most prominent building on the east side of the complex. The building comes from Nasser al-Din Shah trips to Europe who had been frustrated with Western skyscrapers. He was thinking of building a tall construction in the capital. He dreamed of having a building on which he and his wives could view Tehran city and the surrounding landscape. This dream which may have made you laugh, was lead to building one of the symbolic structures of ancient Tehran.

The building was completed in 1284 AH and was remarkable in terms of height, decoration and design, and was the tallest building in Tehran at 35 meters and 5 floors high. Shams-Ol-Emareh was the first building that they use metal in its construction, and it was also a change in construction. The cost of constructing this building, along with providing the equipment, amounted to forty thousand Tomans.

One cannot deny the beauties of the facade of the building, but its interior design is unique as well. Mirrors and paintings and plaster have made this building a magnificent work that touches everyone’s mouth.

Marble bed veranda | The oldest part of the collection

Now it comes to the oldest building in the complex called the marble bed porch, and its construction dates back to the time of Karim Khan Zand. During the Qajar era, it was a place for kings to come and congratulate the people on various occasions. This porch is presenting chalkboard, masonry, inlay, mirror and inlaid lattice effect and looks very eye-catching.

What makes this porch more interesting is the presence of a marble bed built by Fath-Ali Shah in 1221 AH. He ordered the famous Isfahani stone carvers to make a bed of yellow marble in Yazd and install it on the porch. 65 pieces of large and small marble were used in the bed, designed by Mirzababa Shirazi the painter, and the carving was done by Professor Mohammad Ibrahim Isfahani. 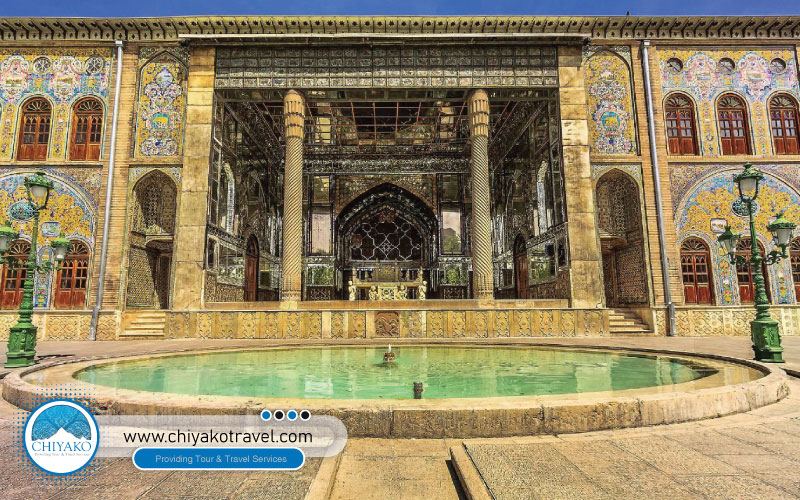 The throne designed to resemble the throne of Prophet Solomon on the shoulders of devils and Fairy. This work is put from four sides on the shoulder of three devils and 6 angels or humans, and is about one meter high from the porch. The dragon and the two lions are also other carvings of this throne, and there are verses of  on the Malek-o-Shoaray-e Bahar throne of Fath Ali Shah and the description of the marble throne.